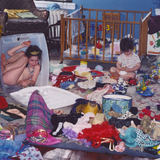 The release of Sharon Van Etten’s much-anticipated Remind Me Tomorrow, her first new album in almost five years, is imminent. Leading into its January 18th release on Jagjaguwar, Van Etten is sharing the album’s second official single, Seventeen, and an accompanying video directed by Maureen Towey. Seventeen follows the album’s first two released songs, Comeback Kid and Jupiter 4, with Comeback Kid being named as a best song of 2018 by the likes of Pitchfork, Billboard and NPR’s All Songs Considered.

On Seventeen, Van Etten shows the chain reaction of moving to a city bright-eyed and hearing the elders complain about the city changing, and then being around long enough to know what they were talking about. She wrote the song semi-inter-generationally with Kate Davis, who sang on a demo version when the song was in its infancy.

"Sharon wanted to use this video to create a love letter to New York, her home for the last 15 years,” describes Towey. “She showed us around all her old haunts -- the places that made her the musician that she is today. Some of these spots are still around, some are just empty lots now. We took an eye toward the city that was both tender and tough, trying to find the ways that a beautiful city can fall apart while still nurturing the hopes of a young artist.”

Remind Me Tomorrow reckons with the life that gets lived when you put off the small and inevitable maintenance in favor of something more present. It was written while pregnant, going to school for psychology, and after taking The OA audition. Since then Van Etten guest-starred in The OA, performed in David Lynch’s revival of Twin Peaks, scored her first feature film, Dieckmann’s aforementioned Strange Weather, and the closing title song for Tig Notaro’s Tig. The range of her passion (musical, emotional, otherwise), of new careers, projects and lifelong roles, has inflected Remind Me Tomorrow with a wise sense of a warped-time perspective. For more on the story behind Remind Me Tomorrow, check out The New York Times’ feature from this past Sunday.