Back to THE PORTRAITS's Music <
Single 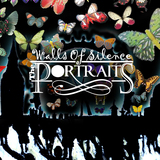 From the cafés of rural France to the stages of Glastonbury ‘Walls of Silence’ Released 4th September 2015 Taken from the forthcoming album ‘Lions and Butterflies’ Song: https://soundcloud.com/ldpromos/walls-of-silence-radio-edit/s-rdDjs The stunning first single from the independent alternative folk band is the perfect introduction to their highly anticipated new album ‘Lions and Butterflies’. After recently wowing the crowds at Glastonbury, for the fourth consecutive year, their growing army of fans and admirers will not be disappointed. ‘Walls of Silence’ is beautifully written, performed, sung and produced, as is every song from this wonderful new album. The husband and wife duo of Jeremy and Lorraine Millington, from Bristol and Galway respectively, have been on a decade long journey that has seen them release five previous albums, hone their song-writing style and performances and arrive at this juncture with what many believe, including themselves, to be their masterpiece. “This is the strongest music I’ve heard from The Portraits to date. It’s always gratifying when musicians you meet and like turn out to make excellent music” – Tom Robinson 6 Music After persuading his parents to invest in a piano for him at the age of 10, Jeremy began a lifelong relationship with the instrument. The son of a diplomat, he travelled to destinations all over the world spending his childhood in various parts of Africa, Europe and Asia. The family finally settled in Bristol where Jeremy studied music to the highest level and decided to take up a career in teaching. His first posting led him to the Isle of Wight where he met Lorraine…… Lorraine grew up in rural Western Ireland and was drawn to the guitar at a very young age, teaching herself and performing traditional Irish songs at family events and pubs. She went on to study Fine Art at the University of Ulster in Belfast, during the worst of Northern Ireland’s struggles when police helicopters roared overhead and taxi drivers were murdered outside her bedroom window. After completing her degree she took up her first job as a teacher. “A wonderful band” – Lembit Opik And so this dynamic pairing came together. Inspired by his travels throughout the world and her personal experiences of the tragedies of war, they formed a partnership both in love and in music that would prove formidable. Setting up home in France they would write together in their farmhouse, planning their future and performing in the cafés and parks of the region. As their reputation and crowds grew, the sudden death of Jeremy’s father and the birth of their two children led the couple back across the Channel to London where they were to take the music scene by storm. “This new album is a heartfelt musical snapshot of who we are” - Lorraine They have amassed a loyal fan base by performing at festivals and venues across England, Ireland and France, winning new fans wherever they travel with their clever, melodic music, both memorable and personal. These songs are about real people, real situations, and real life. The Portraits will be appearing at The Cambridge Folk Festival on Saturday 1st August 2015. See full list of dates below. 2015 Tour Dates 11th July Le Clemenceau, Mouilleron Pareds, FR 1st Aug Cambridge Folk Festival, UK 15th Aug Festival Jazz In Aout, La Rochelle, FR 21st Aug Poundstock Gildhouse, UK 28th Aug Cornwall Folk Festival, Wadebridge, UK 29th Aug Treefest, Tetbury, Gloucestershire, UK 30th Aug Victorious Festival, Southsea, UK 6th Sept Wilkestock Festival, Hertfordshire, UK 24th Sept Cecil Sharp House, London, UK 3rd Oct Tenterden Folk Festival, Kent, UK www.theportraitsmusic.com For CD copies, interview and performance requests please contact Mike Armstrong at:- Tel: 01737 362444, Mike Mobile: 07982 827804 Email: mike73armstrong@aol.com preorder from: http://itunes.apple.com/album/id1019323595 https://play.google.com/store/music/album/The_Portraits_Walls_of_Silence_Radio_Edit?id=Bhmvmg4uelhz7mvtizjwpu5jzxe