TUNE Lewsberg - Through The Garden 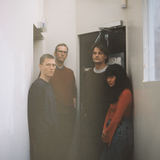 On Friday May 29th, Lewsberg will release a 7'' single with a special edit of ‘Through the Garden’. The song appeared in its original version on Lewsberg’s latest album ‘In This House’, released in March of this year. B-side ‘Nature’ is a previously unreleased song.

Lewsberg would like to take this opportunity to announce some more news:

– The production and distribution of ‘In This House’ got delayed because of some Covid-19 related issues. But it’s not only this new single that will see the light of day in May: ‘In This House’ will finally be available in (online) stores around the globe as well.

– Unfortunately, due to the Covid-19 measures, Lewsberg had to cancel their UK tour this spring. New dates have been announced for September:

More about the new album:

In This House, the second album by Rotterdam-based Lewsberg will see the light of day on March 27th. Like their 2018 self-titled debut album, the record will be released by the band themselves and Cargo Record Distribution.

Having previously received airplay from DJs at BBC Radio 6 Music, Radio X, Soho Radio, Amazing Radio - drawing comparisons to Television, Talking Heads, Velvet Underground and Parquet Courts - Lewsberg’s latest offering seeps into your consciousness in a different way to their debut, though their tendency towards existentialism and black humour is present throughout.

Harsher in sound, but more humane in spirit, the running order feels looser and less poised. In This House refuses to let the listener settle for a single moment, making it impossible to chart a course through the album's meandering ten songs. Today they share new single 'Cold Light of Day' as well as news of an upcoming UK tour: