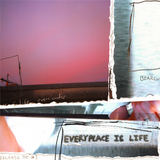 Berlin via London artist Bearcubs has today shared the final taster from his forthcoming second album, 'Everyplace Is Life', a craftily-moulded genre-spanning single with wonky beats, angular constructions and subdued vocal, demonstrating his meticulous artistry and production ability. It features on the new album 'Early Hours', which will be released via Independently Popular on 15th May. 'Everyplace Is Life' is the follow up to previous single 'Overthinking feat narou'. On 'Everyplace Is Life', Bearcubs (real name Jack Ritchie) explains, "The idea came to me when I was on a train to play Great Escape festival in Brighton a couple years back. I was in that summer mood when everything seems rosy and I was thinking about how life can lead you on unexpected paths and about these little moments, good and bad that happen all the time. Looking around the train I got that feeling when you suddenly become aware of other people's lives around you, and you remember that everyone else also has all these desires, worries, habits etc, outside of your own. I imagined little vignettes of things going on around the city like drunk people shouting in the street, a couple laughing together, sirens going past, a kid dropping their ice cream etc etc, like a collage of everyday life." Since releasing his very first piece of music, Bearcubs has created his own fiercely independent path. The release of 'Ultraviolet' in 2018 cemented him as a versatile producer and innovative songwriter and earned him recognition from the likes of FADER, NPR, VICE, Complex and Mixmag. After a much-anticipated relocation to Berlin last year, Bearcubs discovered a new energy for creating music. As the stars aligned in his personal and creative world, he was offered the opportunity to score the debut feature-length film 'Relativity' by emerging director Mariko Minoguchi, premiered at the Munich International Film Festival and nominated at the BFI London Film Festival. After this and time spent absorbing his new surroundings and the slower pace of the city, his newfound perspective culminated with the birth of his second album 'Early Hours', a varied and entrancing journey of his time spent in London in the beginning of his musical career. In Jack's words, "'Early Hours' is a tangled day dream of different experiences, living in London working in a pub whilst trying to write music, transient relationships, friendships lost and gained again, loneliness in the city, the hazy euphoria of partying and being up till the early hours with your friends around you, thoughts of the real world out of mind." Musically the album transitions from slow-burning RnB moments to joyful, club-ready tracks, showcasing Bearcubs' ability to move across the spectrum of genres whilst maintaining the intricacies of his early productions. Inevitably varied as is his musical past, be it spending his teenage years in punk and hardcore bands or playing with a 10-piece hip hop band, 'Early Hours' is a testament to his willingness to defy genres. Bearcubs recently launched his new podcast series, entitled 'The Early Hours', whereby he invites his friends and fellow artists, producers and songwriters to discuss the creative process and talk music in general. Check out episode one, featuring James Hersey and narou here. Catch him playing shows across the UK & Europe to support the album later this year, reaching cities including Paris, Berlin, Amsterdam and London. Full date listings as follows: Oct 22 - Paris - Le Pop-Up Du Label Oct 23 - Brussels - AB Club Oct 24 - Amsterdam - Paradiso Oct 25 - Berlin - Berghain Kantine Oct 26 - Hamburg - Uebel & Gefärlich Oct 27 - Cologne - Yuca Oct 28 - Munich - Kranhalle Nov 4 - London - Lafayette