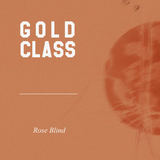 Australian punk four-piece are sharing the second single 'Rose Blind'. from their upcoming album 'Drum', which is set for release 18th August via Felte.

'Drum' is the bold second album from Gold Class. The follow-up to 2015 debut 'It’s You,' 'Drum' is a brasher, vivid widescreen account of a band hitting its stride while betraying the complex signs and scars of a life since lived.

Formed in 2014 by a union of workmates and friends from a Melbourne bar and creative-writing course, Gold Class’ string of lean, explosive live shows culminated in It’s You – a distillation of the then-fledgling group’s wiry punk, carried by Curley’s booming baritone and themes of personal politics, sexuality and identity. The album was shortlisted for the Australian Music Prize and nominated for an Age award and saw Gold Class play sold out shows across Australia and London, at local festivals Golden Plains and Splendour in The Grass, as well as international sets at SXSW, London Calling and Primavera Sound.

Recorded at Melbourne’s Head Gap studios and produced by Gareth Liddiard of The Drones, 'Drum' sees Gold Class explore new territory in both songwriting and sonics. Liddiard was instructive in helping the band capture these new moods. “We wanted to take a risk,” says Curley. “He was the one person everyone felt could do something interesting with the album."

'Drum' distills the messy scope of life into a brave, sometimes brutal but beautiful new document. Whatever will come, the beat – at least – goes on.

Adam Curley, singer/lyricist for Gold Class explains his approach to the new record.

"The week we started to write Drum, my relationship ended and I was left alone in a draughty old house, which belonged to a friend of a friend. In the house, I sat around with my notebook, the quiet hours cut with news from friends and the TV: the suicides of musicians and writers I’d known and queer kids I hadn’t; the systematic abuse of vulnerable people, the constant mockery of anyone on the outs.

I knew what the purpose of the album would be when I wrote the repeated line in ‘Get Yours’: “There’s none left here and all I need.” I wanted it to be a record of defiance, a resistance to the idea of scrambling for a place at a table that wasn’t set for you. A sort of a love letter to anyone who not only can’t meet the standard but doesn’t want to. I wanted it to be a record of rage and ecstasy and endless nights and sex and dumb fun and ventures in solidarity. Not just an album of urgency and longing, but one of abandon and a reclaiming of a self beyond boundaries.

But I couldn’t avoid what was immediately happening in my life, either, that the end of my relationship had uncovered a lot of the feelings of isolation I experienced growing up. And so it turned out that the album is also personal, and I think is in conversation with queer histories of silence and evasion and transgression, which I was revisiting through the writing of James Baldwin and Cocteau. Childhood imagery kept creeping into the lyrics. Maybe I was trying to come to some peace with the past and to stand up and find some agency in the present. I suppose it was the most defiant thing I could think to do: not to write as some act of catharsis but in an attempt simply to document and claim my existence; that I am here."