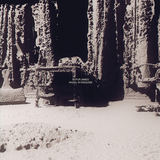 An electronically steered opus, Angel In Disguise promises to explore the themes of love and loss through a masterful blend of harmonic vocals from James, nuanced electronic soundscapes and vibrant drum patterns - punctuated by bespoke visuals, directed by Balázs Simon.

Performing to a sold-out Barbican Hall, London at the start of 2019; followed by a headline European tour including sell-out shows at Amsterdam Paradiso, the London Southbank Centre, and playing a number of tastemaker festivals in the summer, Leifur James will launch Angel In Disguise in intimate venues across Europe later this year.