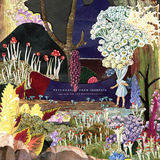 Of ‘Hymn For A Droid’, frontman Jack says: “This track reminds me of a Rhino at full charge, I was absolutely cranking it while recording. Pretty sure my housemates didn’t get a lot of sleep the week this was bring crafted. The lyrics were based on the end of a relationship, those months you’re questioning where your life will end up and if you’re making the right decisions. You’re almost robotic, ticking along like a drone that repeats the same lines over & over in your head, and then you go out with your mates for the first time in ages, take a bunch of thought juice and everything makes way more sense. I wanted the chorus to come out of nowhere like an instant realisation, confusing at first & then the next time you hear it all becomes way clearer.”

Full list of live dates below, tickets are available from http://www.psychedelicporncrumpets.com/tickets.

On the inspiration behind the new album, the band say: “The original concept was to take a 1930’s carnival that had been re-imagined for future generations, a collage of Punch and Judy, carousels and coconut shy’s that progresses in musical concepts and travels with the listener. Then as we started traveling I was swept off into my own kind of circus, the odyssey of touring life. Large nights out, larger characters, drunken recollections of foreign cities and rabbit hole-ing into insanity (kindly illustrated by Quentin Blake)”.