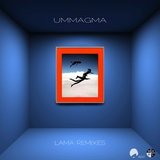 Indie Dreampop duo Ummagma celebrate their ethereal Stereolab-MBV-spirited uber-song ‘Lama’ with a mind-expanding package of eclectic remixes on Emerald & Doreen Records. This LP features an international roster of producers and artists, most of whom you might not directly connect to genres like noise rock or dreampop. Apart from their own roots in Canada and Ukraine, this Ummagma LP is a creative force uniting sonic satellites from Italy, Sweden, Germany, Brazil and Russia. All remixers contribute their own wavelengths and energy to create new versions of this great song. . The outcome is proof that beauty is found in diversity. Italy’s original electro new wave pioneer Alexander Robotnick sways with a spaced out, chilled dream pop version. Irregular Disco Workers add some severe 80s mood and 90s acid feel. Copycat fuses a Moroder-esque synth disco arpeggio with My Bloody Valentine-style vocals and guitars to ingeniously please indie and disco lovers at the same time! Theatre of Delays delivers a heartbreaking emo house version that brings you into the fifth dimension. Label-makers go nogo turn Lama into a Stereolab-esque breakbeat beauty with Notwist-like sounds and 90s indie guitars. Mind Movies turn ‘Lama’ into a flipping, winding mechanical world of breakbeat, swirling around its own axis, and spinning a beautiful tumbling dance. Sounds of Sputnik add a 70s psychedelic edge to it, infusing this track with electro wonder. The feeling you get from all these versions is like an overwhelmingly awesome ride! . 2014 also sees Ummagma pursuing various other collaborations, remixes and releases, involving Robin Guthrie (Cocteau Twins), Malcolm Holmes (Orchestral Maneouvres in the Dark), Sounds of Sputnik (Moscow), and Graham Bonnar (Swervedriver/ Brian Jonestown Massacre) among others. . Ummagma began in 2003 when Alexx (Ukrainian) and Shauna (Canadian) met at a concert in Moscow. Since then, they have been blending their love of synthpop, alternative rock and electronica to create deliciously diverse, dreamy music, loaded with positivity, simultaneously ‘debuting’ with 2 LPs ('Antigravity' and 'Ummagma') in 2012. . In 2013, Ummagma represented Ukraine in Dani Charlton's Alternative Eurovision and won. Similarly, they won the 2014 Alternative Eurovision hosted by Pure 107.8 FM, and picked up 2 awards at the Australian Independent Music Video Awards (including best international pop video), as well as a full-page spread in Rolling Stone Russia.