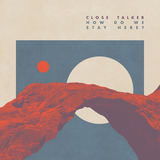 Close Talker is an indie rock band from Saskatoon, Canada. The band has toured throughout North America and Europe, gaining the attention and praise of notable publications such as NPR, Billboard, Clash, Spin, Q Magazine, and Consequence of Sound.

Close Talker about "The Change It Brings":

Time is universal and the only currency we all share. No matter what the situation, everyone is shaped by time. It can change us for the worse, or for the better, but at one point or another, all of us will have to face the force of time. This song, along with our new album, is us trying to wrestle with time. It's conveys trying to learn from our experiences, trying to keep perspective, trying to progress in this weird world, and sometimes trying not to progress at all; to sit in a moment and soak it in for all it has to offer before it becomes nothing more than a memory. 'How Do We Stay Here?' is us navigating through the past two years, to both the good times and the bad that shaped who we are, and learning how to learn from them.

Choosing to self produce their upcoming album "How Do We Stay Here?" allowed the band to hold this album close to their chest while it developed organically over the course of 2018 at RMS Labs in Regina, SK. Close Talker, now more than ever, is interested in music that is timeless - music that won't force the listener into feeling a certain way. To achieve this, the band approached each song following a code of instincts and honesty, including a list of 10 commandments by which all decisions were filtered through. Some were practical like: "Start with what you know" while others were more attitude checks or wholistic like: "No ego" All catering to the music coming first. How Do We Stay Here? is a testament to the band's integrity and a desire to produce music that is original and pure.

"How Do We Stay Here?", the band's strongest and most confident album to date, will be released on August 30th, 2019.