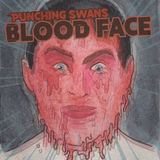 Kent noise trio Punching Swans have just announced details of their new albums ‘FACES’ with the first track ‘BLOOD FACE’ released today. The new album will be released digitally, on 12” vinyl and CD via Skingasm Records on 26th October 2018.

The theme of the new album is typically dark and twisted (the band’s previous releases have tackled underwater monsters & an ostracised bird-man), as singer/guitarist Greg Webster describes…

“The faces refer to the faces of serial killers. They each have a stupid feature for a face which is related to their story... so people who look kinda stupid and are unlikely killers. But then again, who is a likely killer? Can you really tell by appearance? As we wrote each new song they seemed to fit into a particular image of a face and from there we wrote what their particular background story was. We were picturing a kind of Dick Tracy rogues gallery of villains.“

Tracked live over 2 days at Sunlight Studios, vocals were added afterwards, including their first ever guest appearance from Dan Toms of Bear vs Manero on ‘CLIFF FACE’ “That was really fun. Joe had the idea it would suit him really well and for me it wasn’t until he was recording that it totally clicked. He’s a bit good at what he does!”

Unlike their previous album ‘Nesting’, there wasn’t a continued narrative, with each song’s story standing on its own (although ‘GRATER FACE’ and ‘LADY CHEESE FACE’ are about each other… Romeo and Juliet-style lovers who simply could not be). As such, they vanquished the need for any sound effects this time round although couldn’t resist adding some cymbal bowing in the classic horror film soundtrack style.

Punching Swans formed 2012 as a dare. The trio of Greg Webster (guitars, vocals), Joseph Wise (bass, vocals) and Pablo Paganotto (drums, vocals) were all in separate bands and it was mutual friends who thought they’d would work well together. Joe and Greg formed a one off band called ‘Laura Palmer and the One Eyed Jacks’ for a Twin peaks theme night in Whitechapel (that was the first time Joe and Greg had played in the same room) and after that they jammed with Pablo. They started gigging together soon after, firstly as an instrumental band, then adding vocals to some tracks to form their self-titled debut, released late 2012. The follow up ‘Mollusc’ was more thought out, having an actual theme behind it, and led to their first UK support tour with Ragweed. Their third offering ‘Nesting’ followed, which resulted in their first UK headline run. In-between there is a LOT of rehearsing “We never stop rehearsing - it’s a weekly thing and that means we’re always jamming and always recording” and various one-off headline and support shows with the likes of USA Nails, Slaves, Death Pedals and That Fucking Tank. Their influences range from The Fall, Sonic Youth, Bogshed and Mclusky through to John Carpenter, The League of Gentlemen and The Evil Dead films.

“The name was just something that made us laugh. It was born of a text war for the most ridiculous band name after trying to come up with something serious. It’s always served us well as far as gigs and people wanting to check us out. Hopefully they’re not disappointed! Because we’re not exactly violent. I think we’re fairly nice people. Ha! Case in point, there’s a lot of empathy for all the serial killers on this album. We can’t be that mean. Batter Face doesn’t actually kill anyone until he’s dead (having battered and deep-fried his whole face, crispy parts of him go into people’s fish and chips and poison them). This seems to be a recurring thing with us. The monsters of Mollusc, the ostracised ‘madman’ of Nesting. We can’t help but see the human in all this. Yup. even serial killers and Monsters are human. I guess swans are too.”

Punching Swans will be playing the following live shows in the Autumn, with more to follow: