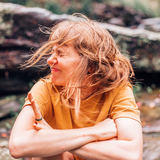 Bonniesongs (aka Bonnie Stewart) is pleased to reveal her new single “Coo Coo”, which is joined on this AA-side radio package by “Frank” – these are the latest two tracks to be revealed from the Australia-based Irish art-folk virtuoso’s forthcoming debut album Energetic Mind. The album is set for release via Small Pond Records in the UK on 6th September, mixing grunge, punk and garage influences with art-folk and jazz experimentalism.

“Frank” is an ode to the reanimated monster from Mary Shelley’s classic 1818 novel Frankenstein; or, The Modern Prometheus. “I’m just trying to portray honesty, and imagination,” says Stewart of the often metaphysical inspirations behind her songwriting. “I’m someone who is led by heart not head. I’m a very emotive doer and thinker and I think this complexity of processing emotions comes out through my music. Where I might be singing about things like monsters or zombies, there’s a dark and deeper feeling that is more complex—whether that’s a sense of place, missing home, being misunderstood and underestimated, or nostalgia and old memories.” Check out the ghoulish video here.

The tracks from this album to date have picked up international radio plays from Amazing Radio, Triple J, FBi Radio, and RTRFM, with press coverage from Paste Magazine, London In Stereo, The 405, The Line of Best Fit, CLASH, Crack in The Road, Everything Is Noise, Overdrive Magazine, and a whole host more.

For a peck of audiences in Australia over the past couple of years, Stewart has been one of those subtly transcendent artists. Described as “dreamy experimental indie folk”, she’s steadily been creating a platform for her unique sound amongst the Sydney songwriting scene. On much of her earlier material, Stewart’s sweet, ghostly vocals sail over the polyrhythmic backgrounds created between her mandolin, percussion and vocal loops, while her imaginative lyrics tell diverse and dreamlike stories of treehouses, mice, birds, flying and video games.

Energetic Mind has taken a new, heavier, direction whilst also retaining the charm of her earlier releases, as she explains: “When I started writing for Bonniesongs, what came out was more dreamy folk, and often still is. I think the album is a balance of this ethereal soft sound but also a lot of darker grungy undertones have crept in. Recording made me realise the huge influence that 90s grunge/punk has had on my writing.”