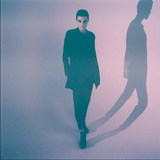 In recent years Scandinavia has provided the world with some of the most original and exciting artists, ones capable of straddling the pop and experimental electronic world with ease, now “Tiger Dreams” heralds the arrival of another amazing talent, Karin Park.

Whilst Karin may be a new name to UK audiences she has already enjoyed considerable success as a Grammy winning pop star in Norway. Tiger Dreams is a radical departure from her pop past though as it sees Karin discard her past to embrace the more experimental, electronic music she has always loved.

Working with Uk based Producer and Co-writer Barry Barnett and acclaimed producer Christoffer Berg (Fever Ray/The Knife/ Little Dragon) and her long time musical partner and brother David Park, Karin has created her own sonic wonderland, one that combines dark pop, dubstep, electronica and industrial music with her unique voice to create something completely new and exciting.

The first fruits of this collaboration is the Tiger Dreams EP, and is the perfect introduction to Karin’s world, a world fashioned by her religious upbringing in a remote rural village in Sweden and the years spent travelling the world with her missionary parents. A world that includes stints as a singer with a vocal range from pop to opera, through to the cancer misdiagnoses that turned that world upside down and heralded her spiritual and artistic rebirth.

On lead track ‘Tiger Dreams’, Karin’s voice manages to sound both fragile and powerful at the same time as it soars over a collision of synthetic bleeps, sub bass and skittering dubstep influenced beats, the perfect soundtrack for Karin’s otherworldly narratives.

‘New Era’ slows the tempo down as industrial beats contrast with icy chimes, wordless ethereal chants and Karin’s already unmistakable voice to create something utterly alien, and with a chorus sure to send shivers up your spine.

Then we have ‘6000 Years’ an almost ambient excursion as Karin’s voice is accompanied by just the most minimal of electronic backings, the focus fully on her astonishing voice as it’s treated and manipulated to create a nightmarish lullaby, like the soundtrack to the most twisted of fairy tales.

Completing the package are remixes from some of the UK’s most acclaimed producers including Photek, who for two decades has been one of the most pioneering figures in electronic music, D1 one of the leading artists to have emerged from the dubstep explosion of the past few years, and Stupid Computer who supplies a twisted electronic rework of the track.

Welcome to the strange, magical, beautiful and dark world of Karin Park.