TUNE The Goa Express - The Day 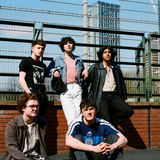 The Goa Express release their urgent new single 'The Day' on Friday the 5th of July 2019. Recorded at Champ Zone with Nathan Saoudi (Fat White Family), it rattles with an unstoppable new wave rhythm, shudders with abrasive guitars and with vocals that sneer with the spirit of seizing the day while everything is falling apart around you, their sound may rustle with the ghosts of acts like The Stooges, Psychedelic Furs and contemporaries like Shame, but the Goa Express possesses youthful energy, northern spite and ever-evolving sound all of their own. The band's frontman James Douglas Clarke says ‘The new tracks are about moving out to university and getting caught for doing shit whilst there and also about the fake, social media platform of our society, lick arses and how everybody wants to pretend that they’re friends.’

Teenagehood, brotherhood and a love for an array of alternative music, across the years, has closely united Burnley and Todmorden's, The Goa Express. Although the intensity of their friendship has resulted in the occasional bust-up, along the way, it is outweighed by their chemistry, which the band offers collectively both on stage and on record. Together, James Douglas Clarke (Guitar + Vocals), Joe Clarke (Keys), Joey Stein (Lead Guitar), Naham Muzaffar (Bass) and Sam Launder (Drums), each contribute to a fuzzy wall of diverse sounds that become hard to pin down with their ever-changing, experimental sound.

Since coming to Manchester, The Goa Express have enjoyed support slots with international bands like The Murlocs, Moon Duo and Mystic Braves as well as performing live with domestic indie champions such as Cabbage, YAK and The Orielles. Whilst at university, The Goa Express have played headline shows at both Manchester's Band On The Wall and The Castle Hotel, as well as slots at Liverpool Psych Festival and the Leeds based, Karma festival. Their live sets are raw, and with expressive, outspoken mindsets, the band transform the hyper-communication and speed of modern life through hard-hitting, relatable lyrics.