Back to Stephen Mead's Music <
Album 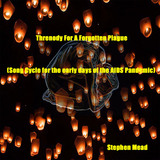 Threnody for a Forgotten Plague

Set against a healing backdrop of ocean waves, the shores of eternity, "Threnody for a Forgotten Plague" is an experimental work-in-progress dealing with the early days of the AIDS pandemic, specifically the fracturing of voices which literally and emotionally occurs during any such outbreak throughout time: the medical, political bureaucracy vs. the voices of humans fighting for their health and well being. Threnody originates from the Greek word threnoidia, from threnos "wailing" and oide "ode, and though Stephen Mead's lyrical soundscapes embody mourning, the endeavor of love is also a constant throughout these pieces. Indeed, it is the galvanizing energy of such love which fought to make strides against callous indifference and ignorance in the beginning, and such love which must go on emblematic as an Olympic torch for as long as such diseases continue diminishing lives. In addition to instruments and sounds recorded around the house, and samples from MusicCreator5, the following sites also provided royalty free sounds and music: SoundDogs.com, SoundBible.com, MP3Skull.com, InternetArchive.org (Various Unidentified Choral Chants before "tweaking"*), and FreeSound.org *Ofert.Deprofundis, Sanctus Mass Viii, Kyrie-MassXviii Particular FreeSound users (Cormi, Kerri, Setuniman, Suburban-Grilla, Pryght-One, ERH) provided: 2166__suburban-grilla__bowl-struck (Lover Man) 109801__cormi__angel2b and 183876__cormi__bells-b-090 (Missing People) 15778__kerri__flutedance and 27130__pryght-one__harp (He Fills the Window) Sonar Ping: DigiFishMusic (Cliff is a Blue Angel) 106723__cormi__circumspection-01b (DOLLARS) 29933__erh__amen, 41618__jus__cellos-down-down, 29589__erh__angels and 29589__erh__angels (Closure, Thomas) 179933__setuniman__sad-viola-0y57 (Buddy) 169035__cormi__harp4-d (And Dream of Seas) 63839__erh__vox-string-eqxspdx-b1-11 (Building Immunities) "DOLLARS" includes lyrics from "Penthouse Serenade", Will Jason/Val Burton, Famous Music Corporation (ASCAP) copyright1931 "Building Immunities" & "The Stones of Memory" includes "tweaked" samples of "From the Cathedral of Books", Jurgen Knieper, Side One Publishing: Milan America/Administered by Buttermilk Sky Associates, Inc., copyright1989 If you prefer CDs of my music can be purchased via http://stephenmeadmusic.weebly.com/