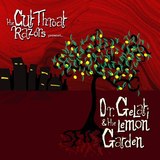 Good evening cave dwellers,
I had been throwing about an idea for a song in my head for some time. I had a catchy chorus with a real rabble - rousing feel to it. A couple of images had stuck in my head. One of them was The Pogues playing ‘Fiesta’ on Friday Night Live sometime long ago with Spider Stacey spraying Shane MacGowan with foam. They looked pissed as farts. The other was a scene from Wish You Were Here, a film based loosely on the early life of Cynthia Payne (better known as Madame Cyn) in which Tom Bell’s character, Mr Stinky Finger, did an uptempo country and western duet with a fat bloke. While the latter sung the tenor lead Tom Bell played percussion by crashing a beer tray off his napper. They looked pissed as farts.

Around this time I was perusing a book shop looking for an appropriate read for my forthcoming honeymoon to the wonderful island of Sicily. I don’t know what drew me to it but I picked up a book called ‘Cosa Nostra – the History of the Sicilian Mafia’ by John Dickie. Real life crime isn’t a genre that I normally go for but a flick through the pages revealed a chapter called ‘Dr. Gelati & the Lemon Garden’ and I remember thinking what a great name for a song and any book with this as a chapter title is worth a read. And it was – it read like a crime thriller – full of heroes, villians and vivid imagery.

Anyway, at some point these two disparate threads of thought came crashing together and the title and theme for the rabble-rousing song were found. Thereafter the lyrics wrote themselves based on John Dickie’s book. Only one slight problem…. the chapter in the book, I later found, is actually called ‘Dr. Galati and the Lemon Garden’. I had misread it. But hey, some people make a very prosperous living by not letting a few trifling facts get in the way of a good story, so why not me?

So here we are now a few years later and in the intervening period we have assembled a fine array of talent from Australia, Ireland, England, Cumbernauld, Grangemouth, Paisley and a couple of teuchter places I have never heard of, or anyone has ever been to, but they may or may not make whisky, or even Aluminium. The idea was to play great music in every half decent style from the past 60 years or so but more importantly not being constrained by any one particular style. The key thing was it had to be a good song and the style had to complement the song rather than the other way around. If we couldn’t decide if a song was better as a polka, big band swing or ska then we would play the song with all three styles in it.

And so far we have done OK. With a few rehearsals under our belts, even fewer gigs and a couple of original 7inch ska and reggae gems lighter we took our tales of love, lingerie, libation and liberation into the recording studio for our debut album. The title of the album? What else could it be? ‘Dr. Gelati & the Lemon Garden’……
We are The Cut Throat Razors.
We hope you will find us strangely unique, or perhaps uniquely strange…..