TUNE So Pitted - holding the void 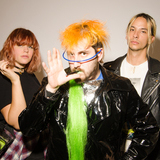 'holding the void' is the latest single to be taken from So Pitted's debut album 'neo', out Feb 19th on Sub Pop Records. The eleven tracks on the album are lean and snarling rebukes, torch songs not in the traditional, unrequited-love sense, but songs that will torch your fucking house down. Screams and howls overtake chants and muttering, equal parts dejection, rejection, and convection, the hot, muggy air circling continuously. It’s fuzzy, angular, throbbing, and pounding, and still, ingrained in the songs by their makers, breathes that catchy quality present in so much of the music they love. So Pitted is: Nathan Rodriguez, Jeannine Koewler & Liam Downey.

“It’s early in the year to make this sort of claim, but we can say with confidence that in ten months’ time you’ll be looking back on neo as one of 2016’s best debuts, by some distance." - THE SKINNY

See So Pitted live in the UK in March: