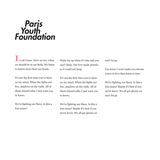 Liverpool alt-rock quintet Paris Youth Foundation have been making waves since they played their debut show at last year’s Reading Festival. In attendance was Radio 1’s Huw Stephens, who was sufficiently impressed to play highlights of the set on his show, while further airplay followed courtesy of Phil Taggart, Steve Lamacq, BBC Introducing, Alice Levine and Radio X.

Now the band build on the momentum generated by their double A-side single ‘Losing Your Love’ / ‘If You Wanna’ by sharing their second single ‘Lost Cause’ which is out now.

With ‘Lost Cause’, Paris Youth Foundation display their innate skill for crafting a towering anthemic hook that’s sure to unite audiences at their forthcoming live shows. Vocalist Kevin Potter’s heartfelt delivery and carefully cool phrasing commands centre-stage as chiming guitars and propulsive rhythms power a buoyant soundtrack for the coming summer months. Its dreamy, upbeat sound contrasts with lyrics which explore the emotions behind a faltering relationship.

Produced by Al Groves, ‘Lost Cause’ was recorded at Liverpool’s renowned Motor Museum studio - the same location which the Arctic Monkeys used during sessions their debut album, and where Oasis recorded their iconic breakthrough single ‘Supersonic’.

After debuting at the Reading Festival last year, Paris Youth Foundation played their first headline show at Liverpool’s Buyers Club. They’ve since played a BBC Introducing gig at the world famous Cavern Club, an NME show with Devlin and Abbie McCarthy, and dates as guests to Transgressive trio Blaenavon.