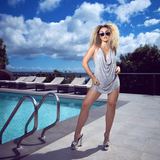 KINDA SAVAGE, KINDA SWEET: It doesn’t really need an explanation—you know exactly what Tallia Storm means when she sings. Without sugarcoating or softening a word, the self written track, KINDA SAVAGE, KINDA SWEET is Tallia’s latest pre order available on Friday 30th October via The Orchard. Written by Tallia the song takes a more confident approach to Tallia’s songwriting. The songstress will drop a hard truth in one breath and shrug it off with an infectious pre-chorus in the next. She may extend a seductive invitation or an empathetic plea before leaving you in your thoughts and feelings. Either way, she finds a way to consistently relate without filter. With each move, she strengthens this connection to listeners everywhere. The singer/songwriter and 5th most Googled music act in the world for 2018 unveils a more mature approach to her songwriting. Tallia’s soulful vocals are joined by an inviting beat, euphoric harmonies, filled with bubbly synths and a jazzy bass line. The 21 year-old sings of finding her feet as a young adult and being perceived either too sweet or too savage. Tallia’s writing has a clever, relatable play on words as she sings of being perceived by other people in the music industry at such a young age. People are intimidated by female’s drive and work ethic in this world Tallia says. She has been hustling since 13 years old when she opened Sir Elton’s concert and has no plans to slow down anytime soon. Delivering electric vocals, r&b hooks and confident, female-driven lyrics, Tallia brings the song to life in a vibrantly pictured video highlighted by her unique style, big hair and infectious smile moving across the screen. Tallia unleashes ability to unleash her biting, unapologetic flow in a song that embraces the modern day reality of being an empowered and ambitious female working her way to the top. In the end, you’ll know exactly what’s on Tallia’s mind, heart, and soul in Kinda Savage, Kinda Sweet.

Mixed by Grammy award winning Phil Tan based in Atlanta who has worked with Mariah Carey, Rihanna, Usher and Little Mix. He is a 3-time Grammy Award recipient, as mixing engineer for Mariah Carey's “The Emancipation of Mimi” (Best Contemporary R&B Album, 2005), Ludacris' “Release Therapy” (Best Rap Album, 2006) and Rihanna's “Only Girl (In the World)” (Best Dance Recording, 2010).