TUNE Greys - If It's All The Same To You 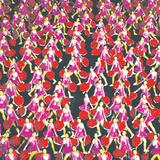 Outer Heaven is a massive leap forward for Toronto post-punks Greys. Delivering on the promises made on 2015’s Repulsion EP, the band tempers their trademark onslaught of discordance with new textures and subtle dynamics, building a more spacious and melody-driven environment atop their noise rock foundation. They fearlessly explore every extreme, simultaneously delivering their most intense and accessible moments, often within the same song evident on first single 'If it's all the samer to you'

“We never want to do just one thing,” says frontman Shehzaad Jiwani. “We want to incorporate as many disparate sounds as possible, yet still have it sound like the same band.” This bold approach saw them return to Montreal to record at the hallowed Hotel 2 Tango studio (Arcade Fire, Godspeed You! Black Emperor) with longtime producer Mike Rocha,giving the songs unprecedented atmospheric depth while never compromising the band’s characteristic cacophony.

A punk band growing up is always a perilous proposition. A dicey gambit to be sure, but your Talking Heads, your Wires, your Sonic Youths and your Deerhunters were all scrappy young kids making sizeable rackets once upon a time. It was only after they decided to make poignantly observant, unexpectedly epochal rackets that they challenged and transcended the idea of what a punk band could be. This is precisely where we find Greys at the outset of their sophomore album, Outer Heaven.

With their intense live show documented admirably on their previous releases - and honed alongside bands like Death From Above 1979, Viet Cong, Speedy Ortiz, Cloud Nothings, Perfect Pussy and their Buzz Records brethren Dilly Dally - the four piece sought to explore their more atmospheric tendencies on Outer Heaven.

Produced by longtime collaborator Mike Rocha at the hallowed Hotel 2 Tango studio in Montreal (Arcade Fire, Godspeed You! Black Emperor), the record displays unprecedented depth and range for Greys, calling to mind groups as disparate as Swans, Swell Maps and The Swirlies without ever losing sight of what defines the band - a distinct mixture of melody and dissonance, order and chaos, volume and substance.