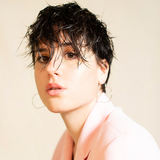 Fanni studied music for 3 years and, with her first band Signals to Noise, paid her dues trawling through the clubs and pubs of Budapest. Of her big influences at the time - Fiona Apple, Tracy Chapman, Sting, LyFanni Mayer is a left-field pop singer/songwriter raised on Hungarian lullabies and Leonard Cohen.

A stormy soul with a voice to match, Fanni was born in Budapest, Hungary and, raised by a strong single mother, she grew up listening to Whitney Houston, Celine Dion and Barbra Streisand. Upon discovering Christina Aguilera and Pink she knew she’d found her calling. Christina Aguilera’s Stripped and Pink’s Missundaztood allowed her to see how vulnerability, passion, and being a woman in a "man’s world’’ could fuse into a pop record. "I was addicted to those singers and songs, I felt like I wasn't alone and I found it so brave and powerful
to talk about things like domestic violence, sexuality, family issues, being misunderstood and feminism through pop music – I fell in love completely.”
kke Li and Amy Winehouse - none became more important than Leonard Cohen’s poetry and the heartbreaking delivery in his performances.

Features on hip-hop/pop band Follow the Flow’s live performances in 2017-2018 brought her to the attention of Universal Hungary who released her debut single 'Horizon' in March of 2018. Its success earned her a spot at Hotsmusic Hungary’s Outbreakers Lab, a workshop for emerging European talent, where she connected with The Animal Farm and decided to come to London to record new music.

"These songs are so raw, much more outspoken and braver than I ever thought I could write. I feel like I found my voice in London and I’m so excited about it.’’