TUNE Jack Perrett - Me And You 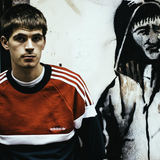 “Close your eyes and think back to 1994, I can see this lad having a real bright future” David Pottinger, Move On Up Blog

“Jack sings as if he already has six albums, three BRIT awards, two Grammys and an Ivor Novello under his belt” - Alex Webb

Jack Perrett is set to release his new AA single, ‘Me And You’ c/w ‘I’ve Got It All But I Want More’ on 9th December 2016 with both tracks taken from Jack’s debut EP, What You Saying.

With the Gallagher brothers still at loggerheads on their will they won’t they reunion shows it’s thrilling when a new act channels the spirit of Britpop’s golden era yet isn’t afraid to include references to the more contemporary singer songwriters such as Jake Bugg/Jack Garrett/Kate Tempest et al within his music. Jack Perrett is one such new voice, youthful, bold, confident and unashamedly populist in his outlook and his songwriting.

Jack’s debut EP What You Saying has gathered critical support across the UK as well as gaining plays in American and Australia. A side ‘Me And You’ was featured on ITV1’s This Morning television programme, whilst well known arbiter of all things cool and Welsh, Dave Owens included another of the EP tracks, ‘Drunk And Stoned’ in his Wales Online weekly playlists.

Jack’s new AA single showcases what he does best, the two sides to his many musical talents, the commercial lightness of touch that can be heard on ‘Me And You’ whilst the no holds barred, bombastic terrace anthem of ‘I’ve Got It All But I Want More’ compares favourably with other touchstone Welsh acts, Pretty Vicious, Tibet and The Sandanistas. Both these singles as well as Jack’s previous EP were recorded in Newport with producer Steffan Pringle and feature contributions from other key Welsh acts including Monico Blonde & Homes. Jack is currently finishing off his follow up EP, slated for March 2017 release once again under the guidance of Steffan Pringle.