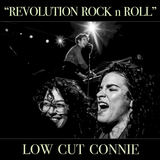 LOW CUT CONNIE are indie/rock ‘n’ roll band from Philadelphia, PA that has made a name for themselves in the US with a raunchy brand of rock n roll that moves asses and minds and can personally count ex POTUS Barack Obama as a fan. Obama included their track, ‘Boozophilia’ in his Spotify playlist which led to piano-pounding frontman Adam Weiner being invited to The White House. LOW CUT CONNIE began in 2011 with Get Out The Lotion and have gone on to gain ecstatic live reviews throughout US media with the eccentric wild-eyed Weiner and battered graffiti covered piano called Shondra (named after an aging stripper from Atlanta) becoming staples of the US live scene. Taking the DIY ethic to heart the band decamped to Ardent Studios, Memphis, TN for summer of 2016 with sessions producing not one, but two full albums worth of material. This year LOW CUT CONNIE move beyond good time boogie to address serious issues with the first of those two long players, Dirty Pictures (part 1). The record is a guttural howl at how living in Trump’s USA feels to the disenfranchised masses. Dirty Pictures (part 1) is released worldwide on 19th May via Contender Records.

Speaking on the new single, frontman Adam Weiner said, ‘“Revolution Rock n Roll” is a song for our times. It's a call to arms in a troubled time. Wake up and make some s**t happen. Make some art, make some change, shake people up, touch each other and get weird’. LOW CUT CONNIE’s previous three albums have gained critically and commercial success in the States and glowing reviews in Mojo, The Independent and The Times. With new LP, Dirty Pictures (part 1) LOW CUT CONNIE are set to emerge as one the most vital US imports in years, a band who mirror these serious times, a band who implore you to sit up and take notice.