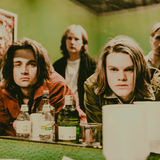 Following on from the legacy of breakthrough single, ‘This Is Not A Protest’, new track, ‘Shock Machine’ is a bold step up in both power of performance and size of hooks used. Working with producer Thomas Mitchener (Frank Carter & The Rattlesnakes) ‘Shock Machine’ showcases a harder, faster side to the band yet still gives the listener a riotous sing along chorus and a break down to end all breakdown. As with the previous release, you have been warned, this song will get stuck in your head.

SHEAFS live sound has earned them a consistent place in This Feelings tour book as well as slots on the Isle of Wight, Reading Festival bills and their largest show to date in front of a 2000 strong crowd at Y Not Festival. SHEAFS debut headline tour in support of ‘Shock Machine’ runs across the UK this February and March.