TUNE THE FEENS - What Are You Dreaming? 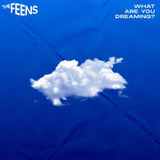 THE FEENS are set to release their new single ‘What Are You Dreaming’ on August 16, via Ditto Music across all digital platforms.

THE FEENS are a new young four piece Indie Rock N Roll band from Scarborough, featuring dual-lead vocalists Freddie Schmuck (guitar) and Adam Lodge (bass), along with Sam Dowling (lead guitar) and Perrie Bunton (drums). The new single ‘What Are You Dreaming’ was recorded at Sugar House Studios in Merseyside and produced by Big Life, that have worked with acts such as Pale Waves and Larkins.

THE FEENS takes a millennial approach with their sound that reinvents the darker vibes from the 80's, 90’s cult acts and adding their own vibrancy and energy to the mix. The tracks that the band bring out give a nod to the likes of Interpol, Editors, Elbow, Joy Division, Simple Minds, Talk Talk and much more. What sets them apart from the pack is their cleverly powerful use of simplicity in melody and use of catchlines, that will ear worm their way into your minds and hearts.

‘What Are You Dreaming’ will be the first of two releases for 2019, to be followed later this autumn by ‘Slip Away’. Last year, after a run of shows supporting the likes of SHEAFS, Glass Caves and Cleargreen, THE FEENS were tipped by This Feeling & Fred Perry Subculture as part of their #Bigin2019.

THE FEENS Previous single 'Freedom' showed great success with its playlisting on Spotify’s New Music Friday, All New Indie, The Indie List, Indie Highlights and Hot New Bands, as well as Annie Mac's 'Best New Music'. THE FEENS have been heard across many stations and shows including Soccer AM, BBC 6 Music, BBC Introducing North Yorkshire and Amazing Radio.