TUNE The Luka State - Bury Me 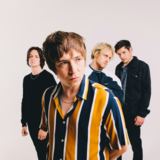 Cheshire four-piece The Luka State are set to release their new single ‘Bury Me’ on October 5 via Autonomy Music.

The Luka State are Conrad Ellis (voice, guitar), Sam Bell (bass, voice), Jake Barnabas (drums) and Lewis Pusey (guitars) and they hail from Winsford. Famous for its salt mine, the town is also lies halfway between Liverpool and Manchester where music and football are the aspirations of every child. Thankfully, The Luka State chose music.

The band’s name came about after an enlightening trip to Canada, where they met a uniquely sanguine man by the name of Luca. Luca was a free spirit who believed in positive energy and living for the moment; the band wanted to disseminate his laissez-faire message to the rest of the world.

New single ‘Bury Me’ is a two chord thrash of a song and an honest celebration of one night stands that everyone has experience with; the feeling of lust and the primal urge when we fancy someone. Speaking of the track, lead vocalist Conrad says, “‘Bury Me’ is about indulging that lust. It's quite blatantly about sex as I think sex should be celebrated and not a taboo subject like it is for some people.” ‘Bury Me’ was recorded at The Pool, Bermondsey (Oasis, Bloc Party, Nick Cave), produced by Northern up-and-comer Jamie Evans and mixed by Alan Moulder (Arctic Monkeys, Queens of the Stone Age, U2). It was the last song recorded for the upcoming record, with Conrad’s blistering vocal performance laid down in one take with no edits.

The area they grew up is a heavy influence for their lyrics, indeed, Conrad states, “Our town breeds boredom and despair”. Nevertheless, the band transform that into a working class vigour in the music they write, with nods to the early work of The Clash and The Jam.

The Luka State’s foundation lies at a youth club where Conrad and Sam first met at the age of twelve, which now serves as their rehearsal space. There is nothing manufactured about this band, they are here to tell frank and honest stories. With past work earning them plaudits in mainstream publications and on radio alike, the four-piece are here to show they are in it for the long-haul.