TUNE The Luka State - Kick In The Teeth 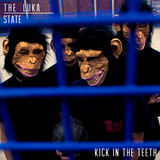 "Immediately jumped out from me from the uploader and I had to share this with you!" Charlie Ashcroft, Amazing Radio
“Supergrass crossed with Kasabian? I think they’re very much better than that”, Tom Robinson, BBC 6 Music
“A big old chunky squidgy slice of unashamedly in your face indie” Rob Adcock, BBC Introducing Stoke
“It is bold it is brash, is an instant love-at-first- spin listen”, Gigslutz, Track Of The Week/In Our Ears
"It is loud, it is fantastic, it is brilliant!", Lucas Yeomans, The Takeover, BBC Radio Stoke
"This is huge, it is really good, really really like it!” Chris Murray, Amazing Radio
“They really know how to write a tune”, Gordon Smart, Radio X
“The Luka State have some serious cojones”, Q Magazine
“The epitome of modern rock ‘n roll’, Vulture Magazine
“These lads clearly mean business”, Record of the Day
“Ones to watch”, The Guardian

Cheshire four-piece The Luka State are set to release their brand new single ‘Kick In The Teeth’ impacting December 7th via Saltown Records and available via all digital platforms on Friday 26th October.

The Luka State are Conrad Ellis (voice, guitar), Sam Bell (bass, voice), Jake Barnabas (drums) and Lewis Pusey (guitars) and they hail from Winsford. Famous for its salt mine, the town also lies halfway between Liverpool and Manchester where music and football are the aspirations of every child. Thankfully, The Luka State chose music.

New single ‘Kick In The Teeth’ is bold step forward in songwriting that hints at the confidence and intricacies awaiting on their yet to be unleashed debut LP. Speaking of the single, singer Conrad said, "It’s about life in those little working class towns with no opportunities. No jobs. No hopes. Life keeps kicking you in the teeth. But somehow you just gotta smile. There’s also some references in the lyrics to to what outsiders might call the town weirdos. But if you’re one of us, you know they’re lovely people. Just a bit strange like.”

‘Kick In The Teeth’ like their previous release, ‘Bury Me’ was recorded at The Pool, Bermondsey (Oasis, Bloc Party, Nick Cave), produced by Northern up-and-comer Jamie Evans and mixed by Alan Moulder (Arctic Monkeys, Queens of the Stone Age, U2). An instantly hooky and boldly commercial release, ‘Kick In The Teeth’ channels mainstream attitude but still retains a defiant indie swagger with its thunderous bass and semi snarled verse vocals.

The area The Luka State grew up is a heavy influence for their lyrics, with Conrad further states, “Our town breeds boredom and despair”. Nevertheless, the band transform that into a working class vigour in the music they write, with nods to the early work of The Clash, Manic Street Preacher and The Jam. The Luka State’s foundation lies at a youth club where Conrad and Sam first met at the age of twelve, which now serves as their rehearsal space, it also provided them with a venue to showcase their recent short film, Elvis Ain’t Dead. As with the best in current and past rock n roll there’s manufactured about this band, they are here to tell frank and honest stories, this four-piece are are in it for the long-haul.