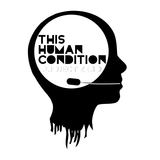 Project Zero is This Human condition's debut album with songs about hitting rock bottom and rebuilding your life. The album begins with a short intro explaining "The Human Condition" and then launches into "Breaking The Code" a song about “Enigma Code Breaker, Alan Turing. "Telepathic Heights" explores a local neighbourhood hitting rock bottom during a riot. Project Zero blends many different styles of electro, including synth pop, trip hop, dance, pop, house, trance, dub step etc...Think early, “Depeche Mode” and a darker “Erasure,” or “The Prodigy” meets Boy George and makes a style they call "Handbag Electro Punk." Project zero explores themes dealing with Abuse, Depression, Family, Gender Dysphoria, Psychosis, Relationships, Riots, Sexuality & Suicide. Whether drawing from their own experiences or other people’s, Project Zero is ultimately about confronting difficult issues in order to evolve, to promote healing and to inspire hope.