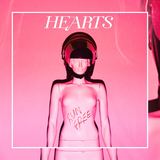 THE HEARTS RELEASE NEW SINGLE “RUN FREE” The Hearts smashed into 2015 with the release of their debut EP ‘Lips’ which quickly gained huge support and now they return with their next single “Run Free” another thrashing guitar lead, synth driven, anthemic song. With radio support on Huw Stevens BBC Introducing shows and ‘playlister’ and huge support from XFM’s Mike Walsh being picked as their “Tips for 2015” and placed on the daytime playlist alongside the likes of Alt J and Circa Waves, it’s fair to say The Hearts had a fantastic start to the year. Having grown up together and beginning their musical journey at Newport’s infamous ‘Teen Spirit’ weekly night, Alex Nash, Hamish Kay and Jamie Roberts decided to form The Hearts last year. They put up a homemade video for ‘Lips’, their first single which quickly hit over 10.000 views with no PR and has now gone over 25.000 plays, not bad going for something they shot in their parents kitchen for £50. Their follow up ‘Celebrate’ the story of a mime artist set free followed and they are planning the next video with visuals being hugely important and influential in everything they do. They now embark on their first headline UK tour beginning with the official launch of Live at Leeds Festival and finishing at London’s Sebright Arms on the 21st May. SHOW DATES: For more information please check out the band’s Website, Soundcloud, Twitter, Instagram, YouTube and Facebook. MAY 1, Leeds, Brudenell Social Club – Live at Leeds Official launch show MAY 3, Glasgow, King Tuts Wah Wah Hut MAY 5, Dunfermline, P.J. Molloys MAY 6, Edinburgh, Electric Circus MAY 7, Manchester, Gullivers MAY 8, Liverpool, Studio 2 MAY 9, Milton Keynes, Craufurd Arms MAY 10, Birmingham, Sunflower Lounge MAY 11, Nottingham, Bodega Social MAY 12, Southampton, Southampton Joiners MAY 14, Brighton, Great Escape Festival MAY 15, Winchester, Railway Inn MAY 17, Bedford, Esquires MAY 19, Cardiff, Clwb Ifor Bach MAY 20, Swansea, Sin City MAY 21, London, The Sebright Arms