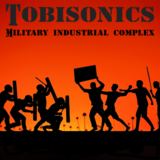 In this, the follow-up to his debut single, “All These Things”, the reclusive producer sets President Eisenhower’s 1961 Farewell Address to the American people against President Trump’s Rose Garden speech in reaction to the Black Lives Matters protests (June 1st, 2020).

Eisenhower, five-star general & Supreme Commander of the Allied Expeditionary Force in World War II, who planned & supervised the invasion of Normandy in 1944-45, and went on to become Supreme Commander of NATO (1950 - 1952); who, while recognizing the need for the Military Industrial Complex, warns of the need for perpetual vigilance to safeguard the liberties of the American people in, what is, a nuanced and prophetic speech.

And Trump, the real estate mogul/reality TV star who avoided the vietnam draft thanks to an apparent bone spur in his foot; who talks of dominating the streets, as he announces plans to deploy thousands of heavily armed military personnel into the cities and towns of America.

Tobisonics skillfully constructs a dynamic electronic production around the two highly contrasting speeches; the groove and pulse of the track present throughout, as he blends elements of sound design & vocal FX with filtered piano & shifting ambient. The 2 min 47 sec track punctuated by its driving chorus of synthwave and fierce percussion; a robovox mantra of the world’s 5 biggest arms manufacturers delivered in rhythmic roll call.

“I’d finished the production back in July and was looking for the right Artist to add vocals, but then I remembered Eisenhower’s Farewell Address. The contrast between the dignified, nuanced, and hopeful tone of Eisenhower’s speech and the macho, antagonistic and fatalistic language of Trump’s speech was so striking, I know I had to put them together.”

“Military Industrial Complex” is to be released exclusively via Bandcamp on “Bandcamp Friday”, October 2nd, before being available across all streaming platforms on the following Friday, October 9th.