Back to Treehouse Sanctum's Music <
Album 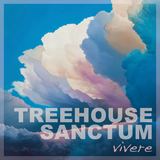 Vivere, is a nod to the innocence of youth and a symbolic sanctuary within which creativity is allowed to flow freely. The album, co-produced by Grammy nominated engineer Nick Sullivan (Dispatch, Los Lobos) and mastered by Grammy winner Jonathan Russell (Taylor Swift, Willie Nelson) is due out on May 5. Vivere means, “to live,” in Latin. It is an album of new hope welcoming the pursuit of what lies ahead, while enjoying all that is in the present. With the lead single, "Chacala," the band ranges from a conspiratorial hush to a full-throated howl in a matter of minutes. Complete with bursting horn blasts and bone-rattling percussion, this track incorporates a dense Americana aesthetic that brings in bits and pieces of other genres to form a complete and mesmerizing musical landscape. Boasting a waltzing melody that gives the various instruments room to roam and explore, "Chacala" was inspired by singer-guitarist Sam Rymer's trip to the titular Mexican village situated on the Pacific coast. He spent time there building houses and learning to surf while floating alone in the calm water at night—the ebb and flow within “Chacala” places the listener next to Rymer in the waves of the sea one warm starry night. “Nashville”, a song that could fit perfectly into the CMT show of the same name, tells the story of singer and keyboardist Danya Lynn Uptegrove as she tried to make a living there at a very young age. Other, more historic songs, like “Pilot & Crew” tell the true story of Lt. D. Rymer (Sam's grandfather) and his crew of nine aboard Buffalo Gal, on her last flight in WWII. Daydream & I Used to Know are lush in arrangements, while Shebiy (Hebrew for, "captivity"), is a dark, brooding, urban alley jazz piece. The title track, "Vivere", tells the story of Saul on the road to Damascus to arrest and crucify Christians and the Light that came down and changed his path forever. Saul received a new mission in life, became the Apostle Paul, and wrote much of the New Testament. The song is for anyone who has done a 180 degree turn in life for the better. Vivere, as an album, is complicated yet joyful; it is full of cohesive instrumentation and raw narratives that ebb and flow with hope. Treehouse Sanctum focuses on intelligent, emotive lyrics covering heroism, love, hope and faith. They couple driving, yet groove-filled rhythms with intricately layered, nuanced instrumentation and harmonies to create a complex and dynamic sound. The band lives well with the knowledge that life is best when you are surrounded by and collaborate with those that inspire you. The innocence of youth has faded, but its memory can be heard through the rough planks and weathered lines of Treehouse Sanctum's latest creation, Vivere. CREDITS Treehouse Sanctum is: Sam Rymer (vocals, guitar), Danya Lynn Uptegrove (vocals, keys), Andrew Horwath (drums, keys), Jeremy Gleason (lead guitar), Dewayne Rymer (trumpet), Ben Slaughter (bass). Supporting musicians on this album include: Jon Boland (accordion, bass, keys, vocals), Dave Villano (violin, mandolin), Sarah Dell Rymer (vocals), TD Davis (organ). Produced by: Sam Rymer & Nick Sullivan Engineered by: Nick Sullivan, Dave Villano, & Christopher J Bloom Recorded at: The Keep (Denver, CO), Dave Villano Studios (Englewood, CO), The Bloom Room (Denver, CO). Mastered by: Jonathan Russell, Masterfonics (Nashville, TN) Album Artwork: Ian Fisher Graphic Design: Jeremy Gleason All songs written and/or composed by: Sam Rymer, Danya Lynn Uptegrove, Jon Boland, Andrew Horwath Special thanks to the following for their support, time & creativity: Consonance Productions, Green Light Go, Regis University, Benjamin Franklin Greer, Ben Fout, Gwen Phillips, Amy Koch Johnson, Erin Streets, Dave Law, Noah Rymer, Giovi Prado, Eleanor Gleason, and all who contributed to our Indiegogo campaign. With God all things are possible. 2017 Treehouse Sanctum - All Rights Reserved www.TreehouseSanctum.com