Discover more artists from TYPE
Back to Kyson's Music <
Single 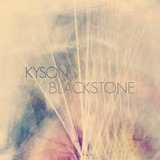 Kyson is the project of Jian Kellett-Liew, a 24-year-old musician from Adelaide, Australia currently based in Berlin, Germany.  2012 has been a prolific year for Kyson. His work has garnered attention through his acclaimed remix of ‘Holocene’ for Bon Iver’s Stems Project, while his debut EP ‘Patience’ for Moodgadget Records saw a release in May. To top off an impressive 5 months, Kyson is proud to announce his newest work, ‘Blackstone’, due for release via Brooklyn-based label Moodgadget Records. The eleven tracks include eight originals and three remixes, courtesy of Essáy, Sina, and Marco Vella.  'Blackstone', is a rich, progressive addition to Kyson’s discography. These are expansive songs – the twinkling chord progressions, the poetic storytelling, and the grandiose sound design of each piece are truly indicative of the strides Kyson continues to make as an artist. Tempos and rhythms vary throughout, but the balance struck between organic and electronic sounds make for a cohesive, genre-challenging album that attempts to engage the listener on a deeper level. Each piece is allowed the space to grow, to flourish and to develop a narrative. The higher vocals and pianos are both emotional and communicative, yet the release retains the captivating low-end and edgy warped synthesis that has defined his earlier work. Kyson is one of those artists who has always seen music as the platform through which he feels most comfortable explaining himself, projecting his imagination, and the imagery that constantly churns through his head. An early lover of hip-hop and sampled records, Kyson became a student of music in Sydney, Australia. Honing his skills in sound design, recording and mastering, he has since embarked on a journey to discover his own unique path toward self-expression. Distance between friends, family and loved-ones, memories of places once visited, images viewed through the lens of a camera, the babble of a street market captured in a field recording: these are Kyson's inspirations, his motivation, and the filter through which his music ought be heard. During November and December of 2012, Kyson will be touring his eclectic electronica throughout Australia. He will be supporting the likes of Tycho, Shigeto, and Kollektiv Turmstrasse, as well as playing at the Eclipse and Strawberry Fields festivals. You can download Kyson - July, December, March (Indian Wells Remix) here: Kyson - July, December, March (Indian Wells Remix) by Kyson Tracklisting 1. Drains of the Red Sea 2. Remi 3. Soul Person 4. Dragon Years 5. I Never Knew 6. Thankyou For Everything 7. July, December, March 8. Ocean Tides 9. Remi (Sina Remix) 10. Remi (Essáy Remix) 11. July, December, March (Marco Vella Rework) Label: Moodgadget Records Catalogue Number: MGT-099 Format: CD/Download Artist Links: Facebook www.facebook.com/kysonproductions Soundcloud: Kyson Website: www.kysonmusic.com Label: www.moodgadget.com/kyson For press, email: jeff.schofield@typepr.com