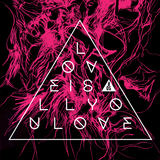 Love is all you Love

BAND OF SKULLS UNVEIL NEW SINGLE ‘LOVE IS ALL YOU LOVE’ THE TITLE TRACK FROM NEW ALBUM ‘LOVE IS ALL YOU LOVE’, PRODUCED BY RICHARD X OUT NOW ON SO RECORDINGS HERE Band Of Skulls have shared their new single and title track of the Southampton band’s fifth album, ‘Love Is All You Love’, available now via So Recordings. The follow-up to 2016’s ‘By Default’, the new album was produced by Richard X, who also co-wrote four of the tracks. Band Of Skulls will support the album release with a series of special shows throughout release week, kicking off with a hometown show at Southampton Central Hall on April 11 and including Islington Assembly Hall in London on April 16. Support comes from Defcon Lawless (Southampton, Bath, London), Colin McLeod (Manchester, Glasgow), and Sam Johnson (Brighton). Exclusive Album and Ticket bundles available here. ‘Love Is All You Love’ breaks bold new ground for Band of Skulls: a tough rock’n’roll record with gleaming pop hooks; an album where melancholy and euphoria combine in equal measure. It’s an album that doesn’t skimp on the force of overdriven guitars, but combines the sounds of a live band with electronic programming and the pop genius of producer Richard X (M.I.A., Goldfrapp, Sugababes, Pet Shop Boys) to create a record that sounds like a band reborn. ‘Love Is All You Love’ was recorded in London’s Miloco Studios, The Smoakstack studio in Nashville, and in the Southampton studio of Band Of Skulls founder members’ Russell Marsden (guitar, vocals) and Emma Richardson (bass, vocals). Following the amicable departure of drummer Matt Hayward, Russell and Emma started the writing process for the record in 2017 and quickly accumulated a host of new songs. Work switched to The Toyshop studio at Miloco to collaborate with Richard X, who encouraged Band Of Skulls' new spirit of experimentation. Once the writing was complete the band decamped to Nashville to record the live element of the record with Eagles Of Death Metal’s Julian Dorio on drums. Lyrically, ‘Love Is All You Love’ is affected by our troubled times. “It influences you whether you like it or not,” Richardson says. “You get affected by the fear of it all and that sense of powerlessness. But there was a concerted effort not to make a depressing record about it all, because I don’t think anyone wants to hear a dark, depressing record about these times.” So songs such as ‘Cool Your Battles’, ‘Love Is All You Love’ and ‘We’re Alive’ are more about finding unity and shared humanity than howling into the existential void. It’s an album that points a way forward, something the band themselves recognise. “If you try something you haven't done before, it reveals what you could do in the future,” says Richardson. ”If you take risks, you come up with more ideas – things are flowing now, and we've already started writing the next album.” Since 2009, Band Of Skulls have released four acclaimed studio albums and have built a reputation as a phenomenal live act, both at home and in the US, where they have performed on the Late Show With David Letterman, Late Night with Seth Meyers, and Last Call with Carson Daly. They have toured with luminaries like Muse, Red Hot Chili Peppers, Queens Of The Stone Age and Black Keys among others, as well as touring the globe as a headline act. BAND OF SKULLS ‘LOVE IS ALL YOU LOVE’ TRACK LIST: 1. Carnivorous 2. That’s My Trouble 3. Love Is All You Love 4. Not The Kind Of Nothing 5. Cool Your Battles 6. Sound Of You 7. Thanks A Lot 8. We’re Alive 9. Speed Of Light 10. Gold RELEASE WEEK TOUR, APRIL 2019 THURS 11 CENTRAL HALL, SOUTHAMPTON (SUPPORT: DEFCON LAWLESS) FRI 12 ST.GEORGES CHURCH, BRIGHTON (SUPPORT: SAM JOHNSON) SUN 14 TRAMSHED, CARDIFF (SUPPORT TBA) MON 15 KOMEDIA, BATH (SUPPORT: DEFCON LAWLESS) TUES 16 ISLINGTON ASSEMBLY HALL, LONDON (SUPPORT: DEFCON LAWLESS) WED 17 STOLLER HALL, MANCHESTER (SUPPORT: COLIN MACLEOD) THURS 18 ST LUKES CHURCH, GLASGOW (SUPPORT: COLIN MACLEOD) www.bandofskulls.com www.facebook.com/bandofskulls https://twitter.com/BandofSkulls www.instagram.com/bandofskullsofficial/