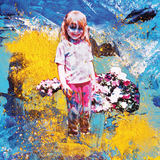 BASEMENT REVOLVER ANNOUNCE NEW EP, SHARE VIDEO FOR FIRST SINGLE WAX AND DIGITAL OUT OCTOBER 18 VIA SONIC UNYON "Alvvays goes shoegaze. Dreamily drift between featherlight fizz and gutting, rueful riffing." - Total Guitar "A patchwork quilt of The Maccabees' softly stummed builds and the melodic force of Alvvays." - DIY "Wonderfully tender compositions full of weight." - Gold Flake Paint "Fuzzy dream-pop melodies." - The Line Of Best Fit "Lush with dulcet reverb." - The Fader Hamilton’s Basement Revolver continue to set their sights on forward motion with the release of their upcoming six-song EP. Wax And Digital - slated for release October 18, 2019 via Sonic Unyon - evolves beyond the bedroomy sound of the band’s previous releases while losing none of its intimacy. Along with the EP announcement, the band has shared the title track. 'Wax and Digital' is the EP’s most vivid romantic statement. Singer Chrisy Hurn says of the song: “‘Wax and Digital’ is about me and my husband, the music that we love together, and how that music has shaped our relationship. In a broader sense it is about how culture informs our lives - even though culture changes rapidly and is temporary, we will always have certain things to hold on to, like music, to look back on and feel sentimental about. I hope that people take away a sense of nostalgia within their own lives, from the things that have helped them to fall in love, or that people think about the things that they have lost, but with thankfulness. Life is a crazy mess, but it’s beautiful and confusing and poetic, may we never forget the things that help us to make some sense of it.” WATCH “WAX AND DIGITAL” HERE The upcoming EP follows a successful 2018 that saw the band released their acclaimed debut LP, Heavy Eyes, via Sonic Unyon and Memphis Industries' affiliate label Fear Of Missing Out. They have now expanded to a 4-piece, with the founding trio of guitarist-vocalist Chrisy Hurn, bassist Nimal Agalawatte, and drummer Brandon Munro, adding second guitarist Jonathan Malström to further augment and intensify their emotionally charged dream-pop. With her mind on her upcoming marriage, Hurn wrote this collection of songs in a period of change. The EP looks back at her religious upbringing that she has - for the most part - since left behind, and gazes ahead at the person she hopes to become. WAX AND DIGITAL TRACKLIST Wax and Digital Master’s Degree Concussion Pt. 2 Have I Been Deceived Romantic At Heart What Are You Waiting For TOUR DATES Sep 19 - Hamburg, DE - Reeperbahn Sep 20 - Hamburg, DE - Reeperbahn Sep 22 - Offenbach, DE - Herbstfestival (Hafen 2) Sep 26 - Montreal, QC at POP Montreal Oct 5 - St. Catharines, ON at Cicada Fest