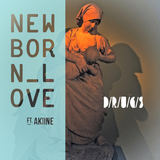 Callum Wright aka D/R/U/G/S, the Manchester DJ and producer, is back with what it easily his biggest track yet, an incredible electro-pop moment in New Born Love, which features a vocal by the sublime Akiine.

D/R/U/G/S’ Callum Wright, the DJ and producer who splits his time between Manchester and London is back with new track New Born Love featuring a vocal by the sublime Akiine

The last D/R/U/G/S track out earlier this year - End of Intelligence - led Indie Shuffle to exclaim: “Holy fuck.. so different“.

D/R/U/G/S uniquely melodic house aesthetic has attracted the support of Zane Lowe, Nick Grimshaw, Huw Stephens and Lauren Laverne. As well, popular remixes for Lana Del Rey, Max Cooper and others make him a ubiquitous figure in clubs around the globe. He’s toured the world solidly for the last couple of years and has become a festival favourite in the UK and across Europe.

The all new D/R/U/G/S live show with permanent new fixture, the stunning vocalist Candi Godbold, is on the road in the UK at the end of Summer; they play live in Bristol (28 Aug, Start The Bus) and London (1 Sept, The Waiting Room) as well as DJing the 1234 festival, Shoreditch on 3 September.

"euphoric trance-dance influenced by the straighter, softer parts of the Orbital catalogue, torpid disco" The Guardian

"Approaching dance music with the gutter heat of rap and a psychedelic imagination, D/R/U/G/S has carved out a new, poetic language of rave" Dummy Magazine

"ultra-bright beats, one Hell of an uplifting single" The 405

" future-synth production, a song that will soundtrack your weekend" Indie Shuffle