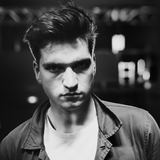 Praise for Fyfe's debut album, 'Control'
"A divine celebration of ordinary heartaches...left-of-centre choices separate Fyfe from the pack" DIY ****
"Contemplative, laid-bare...worth the wait" Sunday Times Culture
"Control is the product of a fiendishly inventive mind...a real force" Q ****
"A highly assured debut...Fyfe clearly has finesse and imagination to spare" Uncut
“Pulls together the classicist perspective with emerging electronic production…Fyfe’s voice soars above it all” Noisey

Fyfe returns with new track 'Stronger', the title track from his first EP of new material since last year's acclaimed debut album, 'Control'. Having surpassed 10 million plays on Spotify, sold out a European tour - including the likes of London's Oslo and Paris's La Maroquinerie- and frequently topped Hype Machine, Fyfe will play an intimate launch show for 'Stronger' at London's The Waiting Room on July 5th, with more music and live plans to follow.

'Stronger' is a more infectious but no-less-intricate reintroduction to Fyfe, on an EP which sees him further colour-in his trademark sound with the mixing assistance of Lexxx (Jessie Ware, Jamie Woon) and David Oversby Powell. Lyrically, too, 'Stronger' is based on the idea of sticking to your guns but also being (says Fyfe) "your own worst enemy. 'Stronger' is about engaging in that struggle to pick yourself up and keep going regardless of what is, or you may feel, is going on around you." This more open and expansive collaborative spirit will be felt throughout the 'Stronger' EP, which also sees Fyfe hark back to his classical roots with a guest-turn from The Iskra String Quartet and Peter Gregson (who've played for the likes of The xx, Vampire Weekend and Surfjan Stevens).

Letting others in may not come naturally to Fyfe, who started the project - after all - with his paint-smeared face turned from the camera, writing songs from his bedroom. His debut album, 'Control', was a brooding study on everything from depression, insomnia and long-term relationships to the loosening of one's grip on life. It's a slow-release which has flourished on 'Stronger', building anticipation for the second album he is currently writing and recording for release next year.

With early fans ranging from Ellie Goulding (who singled Fyfe out on her debut Beats 1 Show), SOHN and London Grammar to Childish Gambino, 'Stronger' is sure to win him many more - a stark reminder of Fyfe long-held talent, and a striking statement of intent for his future.