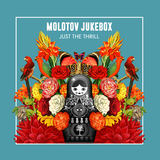 After a fantastic summer and an incredible album release in spring 2016 with the follow up LP ‘Tropical Gypsy’, Molotov Jukebox head out on the UK roads to play a select handful of intimate shows up and down the country. The summer saw Natalia Tena and the band take to the main stages and headline slots at festival such as Secret Garden Party, BoomTown Fair, Lindisfarne Festival, Kendal Calling, Lakefest, Blissfields and international shows in Germany, Ukraine, Spain, Italy and Belgium.

The success of the first two singles from the album ‘Pineapple Girl’ and ‘If I Knew’ brings the third to the forefront in the form of ‘Just The Thrill’. A more laidback affair, but with lashings of Molotov charm throughout. And in true Molotov Jukebox tradition, the single will be accompanied by a standout video shot on the streets (and pools!) of London Town. Here is what Natalia has said about the track...

"This song centres around the idea that a fantasy has more of a pull than reality and maybe because the narrator has been there before, doesn't immediately fall into fantasy's arms, get submerged and let go of the anchor that is real life.

It's a song posed in the throes of a lust affair that may or may not be physical, it could just be all in the narrator's mind, which adds, I hope, a more desperate lost landscape to the song.

Above all we were trying to make a sexy little song, a number that pinned down the mystery of that chess game that first starts any spark between two humans."

If the last few tours are anything to go by, tickets will fly out for these intimate shows, as the tropical sounds of Molotov Jukebox are some of the most infectious sounds to be heard in the UK scene.

All tickets can be purchased via www.molotovjukebox.com