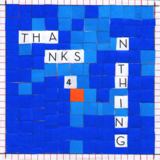 Nilüfer Yanya New single ‘Thanks 4 Nothing’ and video out now Announces first UK and European tour dates of 2018 Including biggest headline show to date at Village Underground, London “The 22-year-old London-based singer-songwriter has a knack for writing lyrics that seem to stare you straight in the eye" - The FADER "For a young artist, Yanya already has an impressive range, and her ability to render the highs and lows of life in her songs is no small feat." - Pitchfork Nilüfer Yanya, London’s 22 year-old “effortlessly smooth new soul star” (The FADER) releases her new single ‘Thanks 4 Nothing’, via Blue Flowers/ATO Records, which she premiered last night on Huw Stephens’ Radio 1 show. Nilüfer has also today announced her first headline U.K. and European tour dates of 2018, starting with a run of six dates across Europe in April and then an eight-date U.K. tour in May, finishing with a night at London’s Village Underground on 29 May, her biggest headline show thus far. Tickets are on sale now via www.niluferyanya.com. ‘Thanks 4 Nothing’ is Nilüfer’s first single of 2018, and follows last year’s releases ‘Baby Luv’ (number 18 in Pitchfork’s 100 Best Songs of 2017) and ‘Golden Cage’ (number 64 in the same list). Detailing the darker thoughts surrounding a break up, ‘Thanks 4 Nothing’ is a poignant look at a crumbling relationship that can’t be fixed: ‘I won’t even try in case it don’t work/I hate you and I hate this’. Speaking of the track, Nilüfer explained ‘Thanks 4 Nothing’ is about “drawing a final line under something that should have ended a long time ago. The song shows you can be bitter and grateful about it at the same time”. The video was directed by new creative duo ENERGYFORCE, who helped Nilüfer realise her vision of recreating a cult, existing within the aesthetic of a classic cult film.. “It carries a strong outdated 70s vibe with occult twists where nothing really goes according to plan and nothing really happens,” Nilüfer begins. “This echoes both the current political climate and the inner failings of a relationship, both cult like in their own way and blindly following one another. Shot on 16mm film for cinematic effect.” 2018 is looking bright for Nilüfer Yanya after landing a spot on the BBC’s annual Sound Of 2018 poll longlist, continuing a stellar 2017 in which she enjoyed extensive support from both mainstream and independent music, culture and fashion publications such as Pitchfork, The FADER and The New York Times, plus a host of DJs at BBC Radio 1, BBC Radio 6 Music (where Nilüfer hit the C List with ‘Baby Luv’) and BBC Introducing in London. A further slew of tips lists, including DIY’s ‘Class Of’ and The FADER’s ‘British Artists To Watch’, as well as The Sunday Times’, GQ’s and Dork’s, firmly established Nilüfer as one of the most promising British songwriters and guitarists of her generation, and an in-demand new talent for this year. Tickets for Nilüfer Yanya’s UK and European tour are on sale now. Tickets are available for purchase at www.niluferyanya.com. See Nilüfer Yanya at the following live dates: 9 - 18 March | SXSW, Austin 9 April | Le Pop Up Du Label, Paris 10 April | Paradiso, Amsterdam 11 April | TRIX, Antwerp 12 April | Mojo Club, Hamburg 13 April | Auster Club, Berlin 25 April | Babylon, Istanbul 18 May I The Great Escape, Brighton 19 May I Buffalo Bar, Cardiff 20 May I Deaf Institute, Manchester 21 May I The Sunflower Lounge, Birmingham 22 May I Barrow Library, Barrow-In-Furness 23 May I Broadcast, Glasgow 24 May I Brudenelll Social Club, Leeds 29 May I Village Underground, London 30 August - 2 September | End Of The Road Festival, Larmer Tree Gardens