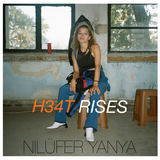 “On a musical and human level, then, the world needs more people like Nilüfer Yanya” - Mojo ****

Nilüfer Yanya (“a true original” - The Guardian) has today shared her new single & video ‘H34T RISES’ on ATO Records. The video for ‘H34T RISES’ was shot in her father's hometown Istanbul by her sister Molly Daniel and features an entirely Turkish crew in the city that the two sisters have re-established a strong connection with in recent years. The original ‘Heat Rises’ featured on Nilüfer Yanya’s unanimously acclaimed debut album Miss Universe which saw release in March on ATO - gaining plaudits from Pitchfork (Best New Music), NPR (Best Albums of 2019 (So Far)), The Guardian (Album Of The Week), The Sunday Times (Debut Of The Week) and countless others. The newly reimagined track ‘H34T RISES’ - which still features Yanya’s first guitar teacher The Invisible’s Dave Okumu on production and backing vox - has been reworked by Yanya with a different structure, additional production elements and an entirely new mix.

In the months since releasing Miss Universe, Nilüfer Yanya made her North American TV debut on The Late Show with Stephen Colbert (HERE), appeared on NPR's iconic Tiny Desk (HERE) and been profiled by CRACK, Vogue, Harper's Bazaar and others. Yanya is currently out on her maiden world tour which comprises shows on the West Coast of America, Mexico, Australia, Japan and Europe - including her biggest hometown headline show to date at Shepherd's Bush Empire on 17 November. Tickets are available HERE.

Yanya said of the brand new ‘H34T RISES’ version: “The original song ‘Heat Rises’ came together over a year or so, maybe. I felt really lucky I was able to work with Dave Okumu on this, there was a lot to learn just being in the room with him. I had the rough demo and beat on my phone for maybe a year, but it wasn’t until the lyrics were fully realised that that it really took shape as a song for me. The original track works perfectly in the album but when I decided to re-release it as a single, I thought a few changes to the mix and structure might help it jump out more and that’s where ‘H34T RISES’ came from.”

Video director Molly Daniel said, “Me and Nilufer hadn't considered shooting in Istanbul, but once the thought had entered our head we wanted to stick with it. I felt like Istanbul would really fit the concept and it was really nice to be able to work with a female led and Turkish crew. I remember finding out my mum was pregnant with Nilufer when we lived in Istanbul, so returning to work there together as adults really felt like we had come full circle.” Yanya added, “I thought whilst I was making Miss Universe - “WWAY Health is out to get us, they’re the bad guys.” But when it came to making the video for Heat Rises it dawned on me that the enemy tends to be better disguised!” Yanya and her sister Molly Daniel’s non-profit organisation Artists In Transit continues to raise funds for displaced families entering Europe and teaching arts & music classes to refugee children in Athens. Visit the Artists In Transit website HERE.

14. Monsters Under The Bed

17. Heavyweight Champion of the Year